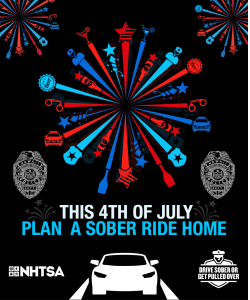 On this Independence Day, the Hawai’i Police Department is participating in the Drive sober or get pulled over impaired driving awareness campaign. The main purpose of the law enforcement presence will be to prevent the tragedies previously seen around the July 4 holiday.

According to the U.S. Department of Transportation’s National Highway Traffic Safety Administration (NHTSA), 11,654 people were killed in traffic crashes involving an alcohol-impaired driver in 2020. Last year, 493 people died in traffic accidents during the July 4 holiday. period (6 p.m. July 2 to 5:59 a.m. July 6). Of these deaths, 41% (201) occurred in alcohol-impaired driving crashes.

Locally, road fatalities have increased significantly compared to last year. There have been 20 road deaths on the island so far, up from 12 at this time last year.

Of the 12 road deaths at this time last year, impaired driving was a factor in 10 of them. So far this year, test results have shown that impairment is a factor in seven of the 20 deaths, but it should be noted that test results for 10 of the deaths have not been finalized, so this number could increase significantly.

“While we wish everyone a happy 4th of July holiday, we need to be clear that drunk driving in Hawai’i is 100% illegal and completely dangerous,” said program manager Torey Keltner. from the Hawai’i Police Department’s Traffic Services, “especially in light of the dramatic increase in road fatalities we’ve seen so far this year.”

“It is important to understand that there is absolutely no excuse for drunk driving, impairment can occur even after just one drink. Being impaired means that your ability to perceive a situation, understand the right course of action and react to it is distorted and/or slowed down.

“Sometimes fractions of seconds in a traffic accident mean the difference between life and death,” Keltner said. He adds that the Hawai’i Police Department will be out in force conducting saturation patrols and DUI checkpoints to help keep residents on the island of Hawai’i safe.

“Being arrested for a DUI costs thousands of dollars and it means putting yourself, your passengers and everyone else on the road at risk.

“There are many options for getting home safely other than driving while impaired. Call a friend, a family member, and nowadays you can call a carpool or a taxi very easily. It doesn’t cost much for sober driving and you can avoid very dangerous situations and potentially life-changing events.

With many July 4 festivities ending late in the evening, the nighttime hours are particularly dangerous: during the July 4 holiday period, 2020, of the 201 people who died in road accidents while impaired by the alcohol, 85% of accidents happened at night. (6 p.m. to 5:59 a.m.).

Police are urging motorists to drive responsibly this holiday weekend and have a safe driving plan. If you plan to drink, plan not to drive. Hawai’i Police Department these safe alternatives to drunk driving:

This July 4, commit to driving only 100% sober. Don’t lose your independence on Independence Day and pose a deadly risk to yourself and other innocent people. Remember: Drive sober or get pulled over.

This entry was posted in Press Releases. Add the permalink to your favorites. Comments and trackbacks are currently closed.