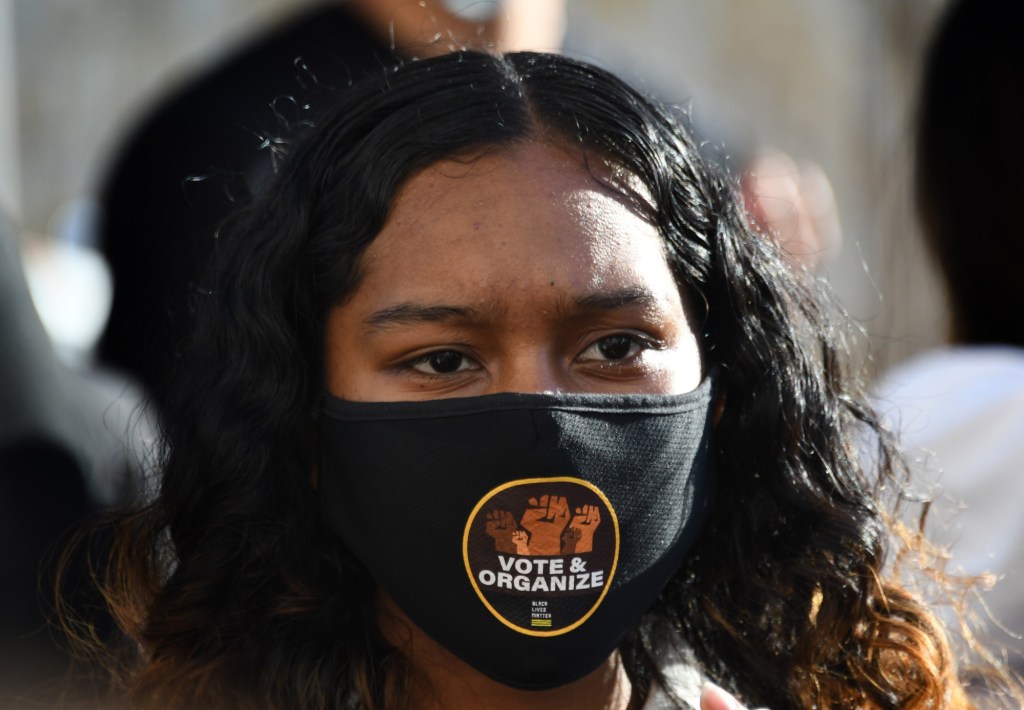 “We know who the gangsters are,” Pasadena civil rights activist Michael Zinzun tells me in a video clip on my laptop here in Pasadena from 2022.

The footage is from Michael’s former community cable TV show, “A Message to the Grassroots”. Watching it sent me straight back to Michael’s heyday in the 1990s – burly Michael in his big hairnet, in his South Central T-shirt, gesticulating all the time. There’s his one blind eye, sight lost after being bludgeoned by a Pasadena Police Department flashlight.

I love how an online biography of Michael – born in Chicago in 1949, died here in 2006 – notes how, unlike other highly quoted guys guested on TV news shows following the Rodney Riots King in 1992, Michael always signed by turning to the camera, raising his fist and saying, “Forward always, backward never – all power to the people.”

I’m troubled by another online writer who finds it odd that his obituaries still mention the fact that very young Michael was a member of the Black Panthers because “it was only for two years”. No journalist would ask the question that this is mentioned. Everyone knows who the Black Panthers were. A writer needs a hook. Rightly or wrongly, the organization that Michael later co-founded and did some very important work, the Coalition Against Police Abuse, was less well known. But you’ll lead readers to CAPA by mentioning the internationally acclaimed organization that both formed him and then dismissed as too dependent on personality cults.

Unique panther or not, as I always mention when I mention Michael, the big man was entirely a kitty. And I say that in the best sense of the word. Soft. Funny. Terribly shy. But fun. I mean, when Michael briefly flirted with the mainstream by running for the Pasadena City Council in 1989, I’m telling you, it was an editorial board meeting you were looking forward to as a non-sleeper. And, even though he was never going to win, this, according to Michael’s Wikipedia entry, is the kind of thing that always happened to him: “During his campaign, the City of Los Angeles and a Deputy Chief of LAPD released information that falsely claimed that Zinzun was under investigation by the department’s counterterrorism division. Zinzun sued for defamation and was awarded $3.8 million. This sentence was overturned on grounds of procedure in a 1991 decision. On appeal, Zinzun won $512,500.

The reason it comes to mind this week is that James Farr, a local filmmaker and cable TV host of “Conversation Live” whose “Thorns on the Rose” about police and the community I have written last year, produced a one-hour documentary titled “Zinzun: A Revolutionary Activist”, directed and edited by Dennis Haywood. As well as his work tackling police abuse at the grassroots level, it includes footage from Michael’s travels to post-apartheid Namibia and Brazil. It opens with Michael speaking while driving a car: “Some white people asked me, they said: Why are people angry all the time; why so much anger? And then I quoted an old black historian who said, “If a black man isn’t crazy 24 hours a day, he’s crazy.”

So many fascinating people here – former mayor Bill Paparian after being shut down by colleagues when he tried to appoint Michael to the Pasadena Northwest Commission, and attorney Joe Hopkins of the Pasadena Journal on the former LAPD and its openly racist policies. Check it out – you can find the film from Monday to rent or buy at vimeo.com/677867663. Always forward, Michael.

I was very sorry to read this week that Betty Ho passed away. A civic stalwart and longtime representative of former Pasadena mayors Katie Nack and Bill Bogaard, she was a giant at city hall and in community life… Altadena musician and songwriter Jeff Parker is among 63 new scholarship recipients to American artists in 10 disciplines who have received $50,000 each past month. I’m pumping his “Suite for Max Brown,” written for his mother, through my AirBuds right now. It’s rock – as befits a jazz artist from Chicago also in the experimental rock band Tortoise.

Write to the public editor at [email protected]