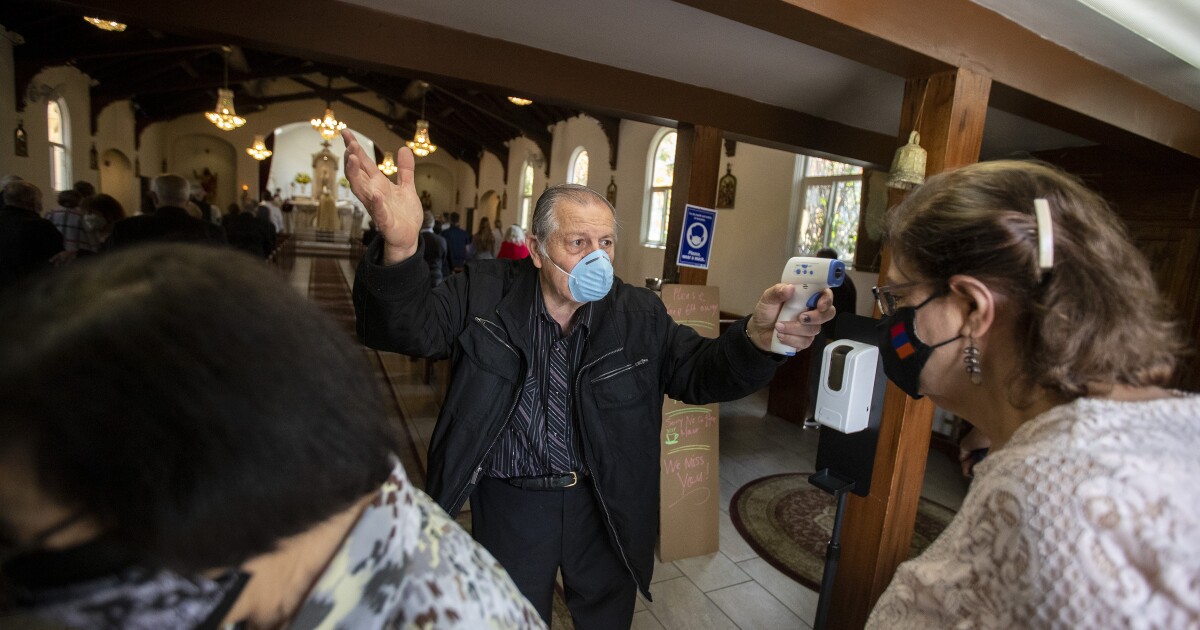 On the outskirts of Boyle Heights, a remnant of the neighborhood’s historic Armenian past is experiencing a revival.

Devotees come from as far away as Simi Valley and Cerritos to pray at Our Lady Queen of the Martyrs, a church once considered the center of Armenian Catholic life in Los Angeles.

Founded in 1952, the church welcomed around 400 parishioners per week at its peak. The establishment celebrated mass for Armenians in their native language, and its cultural center once served as a place to learn about their homeland from local lecturers.

But over the decades, the importance of the cream-colored church has been eclipsed by St. Gregory’s Cathedral in Glendale.

Almost all of the Armenians who once settled in the blocks bordered by Pleasant Avenue and Echandia Street to Prospect Park and Bridge Street either died or moved to richer neighborhoods, such as Glendale and Pasadena. And more recently, loyal devotees were temporarily excluded when the Queen of Martyrs shut down due to public health orders related to COVID-19.

Yet in the midst of a year marked by record deaths, unbearable grief and economic uncertainty, the pandemic has unexpectedly found a way to breathe new life into this weathered place of worship.

Longtime parishioners slowly return to sit on their self-appointed squeaky benches. Reverend Armenag Bedrossian, the only pastor in the church, again hosts coffee and lunch after Sunday services. And he sees new, younger faces in the crowd, even though they are wearing face masks.

“People want to come back,” Bedrossian said. “I think the pandemic was like a spiritual retreat for them. It puts them on top of a hill. Either you are close to God, or you will fall on your head. Which [are] you like?”

Founded in 1858, Boyle Heights was once commonly referred to as West Coast Ellis Island. It was the real melting pot of Los Angeles, a mixture of Mexican, Russian, Japanese, Italian and Jewish settlers. Today, the neighborhood is arguably the Mecca of Mexican-American culture in Los Angeles, with a predominantly working-class Latin American population and landmarks such as El Mercadito and Mariachi Plaza along 1st Street.

But traces of its ancient ethnic groups can still be found throughout the region. Otomisan, a small Japanese restaurant on 1st Street sandwiched between companies offering service in Spanish and English, still makes sushi and bento boxes. Breed Street Shul, an Orthodox Jewish synagogue, has held services in its brick building since the early 1920s and was designated the city’s historic cultural monument in 1988. Evergreen Cemetery is the final resting place of many immigrant, former and new.

Yet Armenian culture has all but disappeared from the region. The Armenians of Southern California are best known for their enclaves in Burbank and Montebello.

“The center of Armenian life has shifted to Hollywood, Glendale and Orange County,” said Levon Marashlian, Armenian historian and professor at Glendale Community College. “It happens to other communities; they move and new models develop.

“Most Catholics now go to Glendale Cathedral because they live near Hollywood or Glendale, not Boyle Heights,” said Osheen Keshishian, founder and editor of the Armenian Observer, a weekly newspaper recounting the life of Armenians since 1969. [a] beautiful room with conferences and banquets.

Surrounded by single-family homes and apartment complexes along Pleasant Avenue, Our Lady Queen of the Martyrs once again welcomes significant numbers of Armenians on Sundays. Mass is celebrated indoors after a series of exterior services modified to comply with coronavirus safety guidelines. Sunday school has also resumed for the children.

“We survived,” said Catherine Alekian Hosharian, 77, a resident of Montebello who joined the church at the age of 10. “And things got better.”

Most feel dedicated to the parish because of the heritage it carries.

Tens of thousands of Europeans displaced by WWII – including Armenians – lived in German camps until they emigrated to California from the late 1940s. For some time this generation attended the holy cross, an Armenian Orthodox church in downtown Los Angeles until then – Cardinal James Francis McIntyre has learned there is a void in the community. By 1952, Queen of Martyrs had become the first Armenian Catholic parish in California, according to the website.

After years without a proper spiritual home, Armenian Catholics have created a place of unity that is their own.

“Because Armenians live outside Armenia, regardless of their faith, the church is not just for religion,” Marashlian said. “It’s a cultural sense. It is a repository.

The uprooted from the war will become the grandparents and parents of the parishioners of Boyle Heights.

“We feel like this is our home,” said Alekian Hosharian, member of the Ladies Guild, the church’s main source of financial support. “Even if our children don’t come to church, if you ask them, [they’ll say], ‘This is our church’, or [they’ll] come if they need a baptism or a wedding.

Simon Hablian, 40, has been attending Notre-Dame Reine des Martyrs since his childhood. He remembers his parents and grandmother taking him and his sister to the historic building because it was the closest Armenian Catholic Church to their home in Glendale.

Now the Simi Valley resident puts his three children in the car every Sunday and drives nearly an hour to attend mass in downtown LA.

“It can be any Catholic church, but to this one I feel connected,” he said. “It’s a place where I always manage to feel peaceful. I love him with all my heart.”

His children were baptized at Queen of Martyrs, just like him. As one of the younger devotees, Hablian said he was excited to see new faces.

Among the new parishioners are the Vallefuocos, who fell in love with the resurgent church community a few months ago. They were part of the intimate wedding ceremony of a close friend at the church presided over by Bedrossian. Spiritually, something clicked. And Bedrossian’s loud demeanor hooked them.

They are neither practicing Catholics nor Armenians and do not know the language. But “we fell in love with Father David,” said Anna Vallefuoco, a resident of Cerritos, 43. Her two children recently completed their Confirmation and scheduled their First Communion.

“Even in Armenian much of it transcends the language. It doesn’t matter if it’s in another language. I still understand the meaning and the tone, ”she said.

Lately, there has been a lot to celebrate at the Boyle Heights place of worship.

The pandemic is receding. The faithful celebrated the Armenian Passover on April 4. Three weeks later, President Biden officially acknowledged the murder of over a million Armenians at the hands of the Ottoman Turks from 1915 as genocide – the first US president to do so. Recognition has served as a balm amid decades of internal geopolitical struggles.

The pastor acted as the glue of the weathered church, although his faith was tested.

At the dawn of the new decade, doubt had seeped into his soul. The future looked bleak. His congregation kept getting older. What would become of this church where he had spent so much time? It wouldn’t last much longer, he worried.

But now he no longer entertains such thoughts and is reluctant to remember. He is also a changed man, reformed by the intense uncertainty of the pandemic. He is confident in the plan of God and of his followers.

“I have always had faith in this community. Otherwise, I would never survive here for 10 years, ”he said.