Bolivians campaign in London for awareness after contested 2019 election 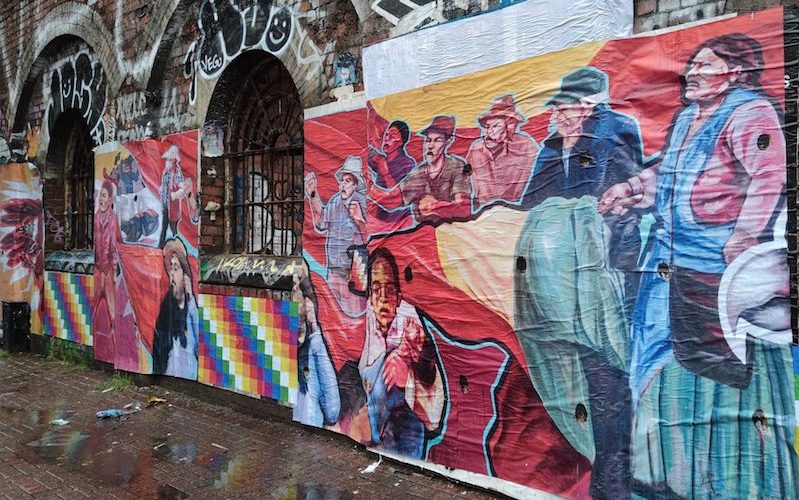 Bolivians campaign in London for awareness after contested 2019 election

A new campaign has been launched to educate the public on Bolivia’s recent history and demand justice following the contested 2019 elections in the country.

Wiphalas Across the World is a campaign group organized by Bolivians living in the UK who want more people to know about the violent consequences of the November 2019 elections.

The 14-day campaign kicked off last Friday with a virtual exhibition of a mural in Shoreditch, which depicts the events and will continue over the next two weeks with panels on indigenous peoples’ rights and the role of the community. international.

Campaign leader Claudia Turbet-Delof said: â€œWe are working to empower ourselves, to gain the respect of others and not to feel invisible.

â€œWe do not demonstrate in the streets: we work rather to raise awareness and educate people.

“We want to shed light on the impact of international interference in countries like Bolivia.”

For the activist, it is important that her neighbors in the UK, where she has lived for many years, know the impact of international interference in other sovereign states.

The group argues that the electoral aftermath, which led to the exile of then-president Evo Morales, was a coup, a position supported by research from the Center for Economic and Policy Research, an American thinker, but opposed by the Organization of American States.

According to Human Rights Watch, no one was held responsible for 36 murders during the post-election protest, including 20 people who died in two massacres witnesses attributed to state forces opening fire on protesters.

Corbyn said: â€œIn 2019, the Wiphala flag became a symbol of resistance against oppression around the world following a right-wing coup in Bolivia.

â€œThe world has been inspired by the Bolivian people’s insistence on sovereignty, democracy and social progress and their determination to overthrow the coup through mass mobilizations and at the ballot box.

â€œI am proud to support the work of Wiphalas Across the World in London, their recent launch of public works of art to commemorate the victims of the Bolivian coup and their broader solidarity work with Latin American communities in whole world.

Wiphalas around the world will continue its work with freely accessible online events.