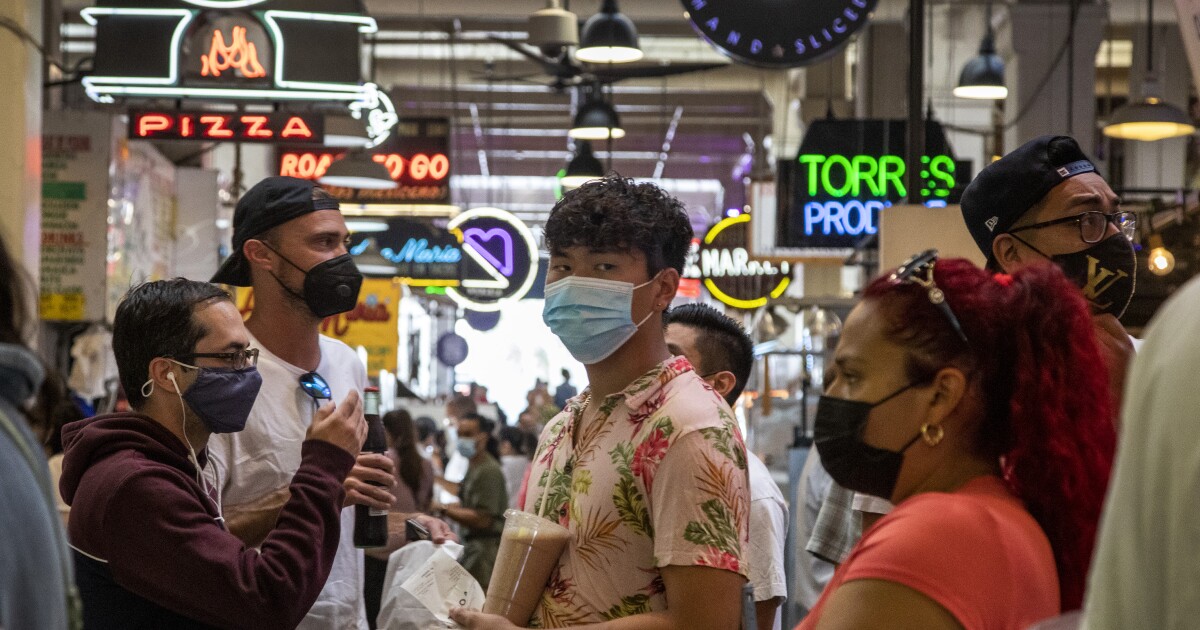 With the summer coronavirus outbreak in California worsening, authorities are unveiling new rules, stepping up efforts to get more people to wear masks, and even using a few sharp remarks as part of an urgent campaign to stimulate vaccinations and slow the rapid spread of the highly infectious Delta variant.

The state on Wednesday urged everyone – even those fully vaccinated against COVID-19 – to wear masks indoors in public, joining a new nationwide campaign to increase protection amid a continuing spike in case.

But the ultimate goal is to convince those who haven’t been vaccinated to get vaccinated, which experts say is vital to turn the tide.

And there are some early signs of movement among Californians who, so far, have remained on the fence.

From July 18 to 24, providers statewide administered an average of just over 64,000 vaccines per day, about 3,100 more daily doses than the week before.

At first glance, a 5% increase doesn’t seem that big. But officials say any hike is welcome.

â€œOur sense of urgency to increase immunization among residents remains very high, and we are pleased with any signs of increased immunization,â€ said Barbara Ferrer, LA County Director of Public Health.

About 53% of Californians are fully vaccinated against COVID-19, according to data compiled by The Times.

A larger slice of the state, about 61%, received at least one dose of the vaccine. But officials stress that it is vital for anyone who has received their first injection of Pfizer-BioNTech or Moderna to complete their vaccination schedule so that they can be as protected as possible.

But given the latest resurgence of the coronavirus, some officials more regularly express their frustrations with those who have not yet rolled up their sleeves.

Earlier this week, Gov. Gavin Newsom went so far as to compare choosing to stay unvaccinated to driving while intoxicated.

“We are at a point in this epidemic, this pandemic, where the choice – the choice of individuals not to be vaccinated – is now impacting the rest of us in a deep, devastating and deadly way,” did he declare.

Los Angeles County Supervisor Sheila Kuehl couldn’t hide her exasperation this week at “all the unvaccinated idiots who are increasing the number of cases through their behavior and choices.”

â€œIt’s a public health crisis. I don’t know what more it takes for people to understand the seriousness of this crisis, â€added supervisor Holly Mitchell at the last Supervisory Board meeting.

The story of California’s COVID-19 vaccination campaign has been one of steady increase, followed by precipitous decline.

The number of shots in the arms of Californians each day, on average, peaked in mid-April at around 400,000. Since then, the pace has slowed considerably.

Officials and experts have long said that there are many reasons why someone may have delayed vaccination.

Some may be wary of potential side effects or be unable to stick to their schedule. Others may have hesitated because of a deep-rooted mistrust of government or health organizations resulting from systemic inequalities and institutional racism.

And a significant number of people categorically oppose getting vaccinated, for various personal or political reasons.

Even if the state maintains its current vaccination schedule, it will likely take months to fully immunize the part of the population deemed necessary to achieve herd immunity – the level at which sustained transmission of the virus is interrupted.

Estimates vary, but experts generally estimate that between 70% and 85% of the population should be vaccinated to achieve lasting protection.

California, despite one of the strongest vaccine coverage levels in the country, remains well below this range.

Over the past week, California has reported a seven-day average of nearly 7,400 new cases of coronavirus per day – about eight times the rate from four weeks ago, according to data compiled by The Times.

As of Tuesday, 3,565 coronavirus-positive patients were hospitalized statewide, including 770 in intensive care.

Both figures have doubled in the past two weeks.

Officials point out that the vast majority of new infections are found in those who are not vaccinated.

From July 14 to 20, the average rate of coronavirus cases among unvaccinated Californians was 20.7 per 100,000 people per day – about six times the comparable rate of individuals vaccinated, according to health officials from the State.

But with transmission on the rise, officials say more precautions are warranted.

“It takes two weeks from when a person receives a dose of Johnson & Johnson vaccine, and six to seven weeks from when a person receives their first dose of Moderna or Pfizer, before they are considered fully. protected, â€Ferrer said. the week. “In the meantime, it is still extremely important that those of you who come to get vaccinated wear your mask, even if you are still wearing your ‘just vaccinated’ sticker.”

LA County has been demanding for weeks that even fully vaccinated residents mask themselves in indoor public spaces, as an added precaution to prevent transmission.

State health officials on Wednesday urged – but did not mandate – all Californians to do the same.

The new recommendation appears to be more extensive than the latest guidance from the U.S. Centers for Disease Control and Prevention. This agency informed on Tuesday that residents wear masks indoors when in public in areas where community transmission is considered high or high, the two worst classifications on the agency’s four-level scale. .

Most of California fell into one of those categories on Wednesday, including the entire southern third of the state. And more than 90% of California’s population live in areas under one of those designations, according to the state’s Department of Public Health.

â€œThe Delta variant has caused a sharp increase in hospitalizations and case rates statewide. We recommend masking in indoor public places to slow the spread while continuing our efforts to get more Californians vaccinated, â€said Dr. TomÃ¡s AragÃ³n, director of the California Department of Public Health and head of public health for California. ‘State, in a press release.