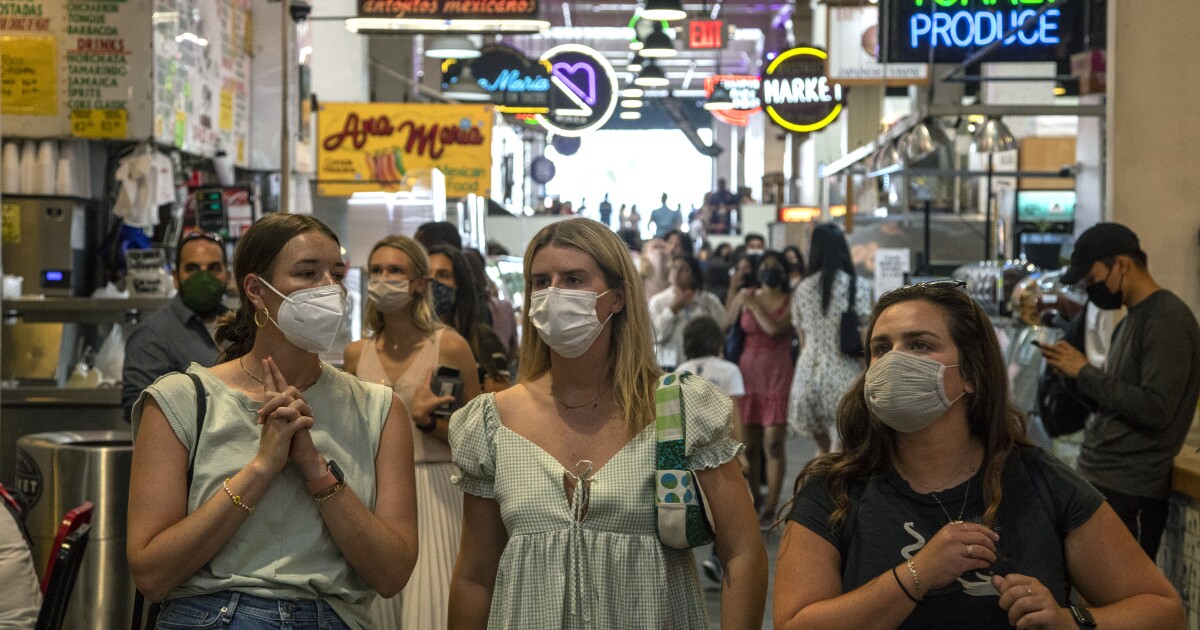 Los Angeles County has seen an increase in ‘breakthrough’ coronavirus cases lately, but data continues to show that those vaccinated for COVID-19 enjoy vigorous protection – even against the contagious Delta variant – and are much less likely to be hospitalized if they become infected.

The latest figures highlight how the county’s recent wave of coronavirus is different from previous peaks in the pandemic, both in terms of people getting sick and the spread of the virus throughout the county.

As of June, fully vaccinated residents accounted for 20% of all confirmed coronavirus infections among those 16 and older, according to figures from the Los Angeles County Department of Public Health.

However, that same month, they accounted for just 8% of all hospitalizations related to COVID-19.

This trend persisted until July. In the first half of the month, about 26% of all diagnosed cases were in fully vaccinated residents, according to figures presented this week by county public health director Barbara Ferrer.

This means that unvaccinated residents still accounted for nearly three times as many infections, even though they have been a minority of the population since the start of the month.

And despite the rise in cases of post-vaccination “breakthroughs”, the proportion of those who became sick enough to require hospitalization earlier this month remained essentially stable from June.

â€œAlthough people vaccinated are seeing an increase in new diagnoses of COVID, they primarily experience their infections not as serious illnesses that take them to the emergency room, but as bad colds,â€ Ferrer said this week.

Those who are not vaccinated, she continued, “just don’t have the same level of confidence if they are infected with this virus that it will lead to mild illness.”

Of the 504 people who died from COVID-19 across the county from April 1 to June 30, 96% were not vaccinated or had not completed their inoculation regimen, the data showed.

County health officials are trying to better understand factors, such as being immunocompromised, that can put fully vaccinated people at risk of dying from COVID-19, Ferrer said.

The rise in vaccinations is also changing the trajectory of this summer peak. In previous outbreaks, low-income, densely populated areas have been hit the hardest, as essential workers put COVID-19 to work and then spread it at home. Areas such as eastern Los Angeles, northeastern San Fernando Valley, and southern Los Angeles experienced the worst spread.

â€œThese are different communities from those with high case rates in our previous outbreaks,â€ she said. “So far, it appears that transmission in these areas is mainly due to community spread among young adults.”

More than 53% of Angelenos have now been fully vaccinated, according to data compiled by The Times.

Health officials said it was not surprising that some people are infected even after being fully vaccinated.

â€œInfections after vaccination are expected. No vaccine is 100% effective, â€said Dr. Anthony Fauci, the US government’s top infectious disease expert last week. “However, even if a vaccine does not completely protect against infection, it usually protects against serious illness if it is successful.”

Ferrer said the disparity in infection and hospitalization rates underscores how much higher the risk is for those who have not yet rolled up their sleeves – especially in an environment where community transmission is on the rise.

Over the past week, the county has reported an average of about 2,400 new cases of coronavirus per day, according to data from The Times. This is more than six times the rate observed at the start of the month.

But if no one were vaccinated, Ferrer said, the number of daily cases could possibly be twice as high as today.

â€œSo instead of having an average of 2,400 daily cases last week, our daily case count could have been closer to 5,000,â€ she said.

Overall, 991 coronavirus-positive patients were hospitalized across the county on Wednesday, a more than three-fold increase since the start of the month.

LA County is not an outlier. Statewide, health officials note that there are large gaps between the rates of infection and hospitalization of those who are vaccinated compared to those who are not.

From July 14 to 20, the average rate of coronavirus cases among unvaccinated Californians was 20.7 per 100,000 people per day – about six times the comparable rate of individuals vaccinated, according to the Department of Public Health of the United States. ‘State.

“The most contagious Delta variant is on the increase, and being fully vaccinated offers the best protections against the disease,” she said in a statement.

The highly transmissible Delta variant is a more formidable foe than previously thought, largely due to its ability to infect and spread by fully vaccinated people, according to data collected by the Centers for Disease Control and Prevention.

A confidential document prepared by the agency cites evidence of a recent outbreak in Massachusetts involving at least 145 people infected with the Delta variant, which was first detected in India. During the Massachusetts outbreak, the viral loads of the 80 vaccinated people were essentially the same as the viral loads of the 65 unvaccinated people.

Over the past week, California has reported an average of nearly 7,500 new cases of coronavirus per day – more than eight times the rate from four weeks ago, according to data compiled by The Times.

As of Wednesday, 3,605 coronavirus-positive patients were hospitalized statewide, including 784 in intensive care. Both of those numbers have doubled in the past two weeks.

Despite the sharp increases, however, California remains well below the heartbreaking heights of the fall and winter surge, when an average of more than 40,000 cases were reported daily and nearly 22,000 COVID patients. -19 were hospitalized.

Deaths from COVID-19 also remained relatively low statewide – around 28 per day, on average.

One of the main ones is the presence of the Delta variant, which is said to be twice as transmissible as conventional coronavirus strains.

This variant quickly became the dominant strain circulating in California. Given how easily it spreads, experts say it attacks particularly easily those who have not yet been fully vaccinated.

Another likely contributor, however, is behavior. The latest wave of the pandemic began to materialize the day after California reopened on June 15, which saw the state lift many restrictions that had been put in place to prevent transmission of the coronavirus.

Residents had additional options for mingling and mingling – providing more opportunities for the virus to spread, especially among younger, unvaccinated people.

Earlier this month, Fauci cited data showing that the Pfizer-BioNTech and Moderna vaccines were 95% and 94% effective, respectively, compared to symptomatic COVID-19. And in the United States, the Johnson & Johnson single injection vaccine was 72% effective against a clinically recognizable disease.

So far, LA County has not seen a huge discrepancy in infections by vaccine type.

As of this week, only 0.27% of people fully vaccinated with the Johnson & Johnson vaccine were subsequently infected – compared to 0.15% of Pfizer-BioNTech beneficiaries and 0.09% of those who received Moderna .

Ferrer said the numbers are more “convincing evidence of the effectiveness of vaccines.”

“We can be very confident in saying that the three vaccines continue to protect people well – especially against serious illness and death and certainly even against infection,” she said in a telephone briefing with journalists.