Giving victims of sexual violence a space to be heard 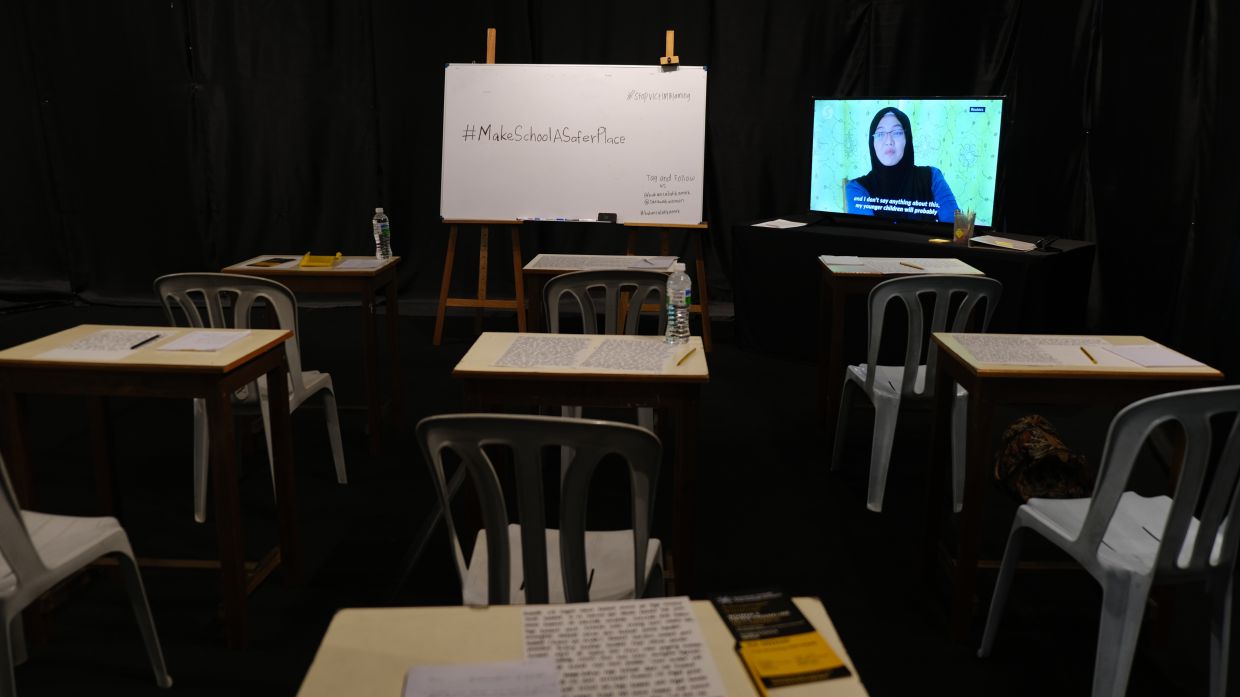 Giving victims of sexual violence a space to be heard

Her attacker was a student at her school – an elderly person – who blackmailed one of his friends into taking pictures of her changing in the dorm.

“I didn’t know, until K’s friends called me. They directed me to a room and kept interrogating me for everything (sic). They said they found a photo of me, in my underwear. They realized it was me. I found out it wasn’t just me. K had a file of naked body photos of his cadets, my own friends, who ‘he sells to his lot mate. I was ashamed. I felt see through. I felt disgusted. Until now. There has been no retribution on K so far, (and) he has a successful life. If only people (knew) how sick in his head he is.

This was Marie’s testimony, one of approximately 25 testimonies of women and children who experienced harassment and abuse that were featured at the #bukansalahkamek (#notmyfault) exhibition organized by the Sarawak Women for Women Society (SWWS) at La Promenade Shopping Center in Kuching, Sarawak, for one month until April 16.

The exhibit is part of the NGO’s Stop Sexual Violence campaign which has been running since 2019. The slogan #bukansalahkamek aims to reassure survivors of sexual violence and abuse that they are not alone, as well as to stimulate conversations among the public on the issue.

“The #bukansalahkamek exhibition and campaign is a localized version of the global #Metoo movement. It started because of this victim-blaming culture. There is a huge gap between us who want to create safe spaces for survivors and we actually do. So this campaign is a start, it’s our way of creating a safe space for survivors to tell their stories and to know that what happened to them was not their fault.

“The campaign also aims to encourage and normalize conversations on the subject and identify the causes of sexual violence. We want to fill the void…the lack of comprehensive sex education for our young people,” said Kim Tan, who ran the exhibition and leads the campaign for SWWS.

Getting survivors to share their story and be part of the #bukansalahkamek exhibit has not been a challenge and most survivors want and need to be heard and believed. Photos: Women’s Society for Sarawak Women

Tan is a survivor of sexual violence herself and although she has gone to therapy to help her heal, she has found very few ways to talk about her trauma without fear of being judged and blamed.

“And that enraged me. I also knew a lot of my friends who felt the same way and I really wanted to do something. So I looked for an NGO that supports women and told them about this idea of ​​leading this campaign because it’s something I’m really passionate about,” she shares.

“Working on this campaign has helped me heal, even though it has been triggering at times. But it has helped me find community and purpose. I refuse to let my abuser take control of my life,” says- her insistently.

Tan hopes the exhibit will lead to more open discussions and conversations about sexual violence so the public can learn and be aware of the issue.

Although the campaign has been running since 2019, due to the pandemic, it has aired online for the past two years. This was not an obstacle to achieving his goal. In fact, it increased its visibility as more people spent time online due to the various motion control order periods.

“People were constantly scrolling and going online and I think more people were also trying to get into some kind of activism as well. Maybe the time at home made people think and they were looking for a cause or purpose. So many tapped into social issues and our audiences picked up,” Tan says.

“It is so important for us to have the will to learn, unlearn and relearn. We are all working for a safer community and a better future and we must be willing and open to learning things that are different for us and It’s time to accept each other’s differences and not let survivors live in fear and shame,” Tan adds.

Finding survivors to share their stories was no challenge at all.

“In fact, the reception has been very good and it made us realize that many people need a platform like this to feel like they are not alone; to be heard and raw.

“Most of the time, survivors don’t tell anyone what happened to them because of stigma, shame and fear of being blamed,” says Tan.

In the #bukansalahkamek exhibit, the stories of survivors are divided into four settings: a children’s space with stories of child sexual abuse, a classroom with stories of abuse and bullying in schools, a room that highlights stories of trauma and abuse in relationships and marriages, but also workplaces and public spaces.

Testimonies from schoolchildren about the harassment and abuse they have suffered in schools were displayed in a classroom.

“We have about 25 stories which are all translated into English, Bahasa Sarawak and Mandarin.

“While I would have liked to have had this on a larger scale, I think what we’ve been able to put together has been successful in getting the public to understand and talk about the issue. And while it has helped a few people to to feel like they’re not alone…it’s good,” she said.

Tan’s message to survivors is encouraging.

“There is life after trauma. No moment in your life defines you. You define life for yourself,” she concludes.