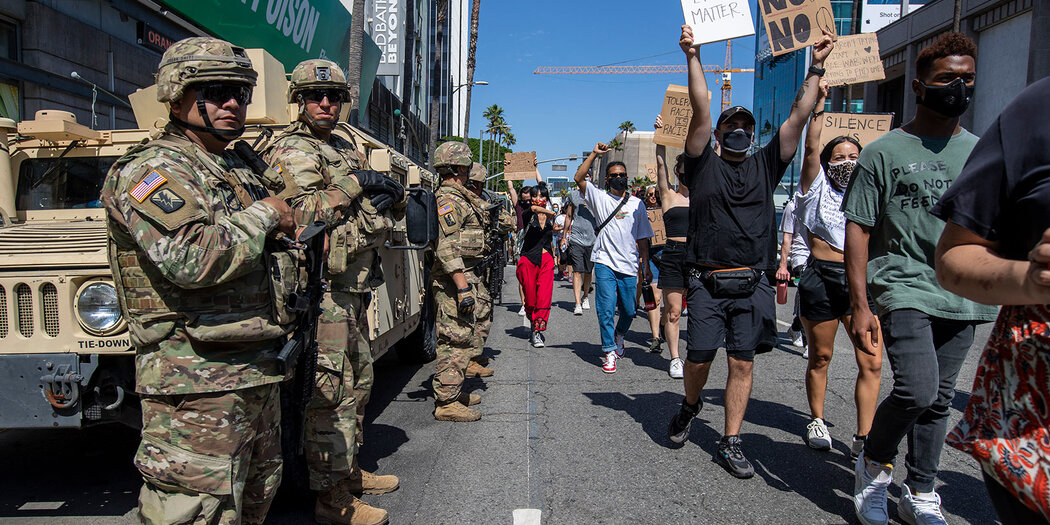 The National Defense Authorization Act for Fiscal Year 2022 (NDAA) passed by the House last week includes three crucial reforms that would fill dangerous loopholes in the laws that govern the nationwide deployment of the National Guard. These changes, adopted in response to the events of the past year and a half, would help prevent political abuse by National Guard forces.

First, the bill incorporates the District of Columbia National Guard Autonomy Act, which would transfer control of the DC National Guard from the president to the mayor of Washington. Unlike all the other National Guards in the country, the DC Guard is never under local control. While the Guard Forces of the 50 states, Puerto Rico, and Guam all report to their state or territorial governors unless called upon to federal service, the DC Guard is still under the command and control of the President.

This outdated arrangement is a relic of the days before DC had an elected local government. Further, it undermines the Posse Comitatus Act, which prohibits federal military forces from participating in civilian law enforcement activities unless there is a law expressly authorizing such deployment, such as the Law on Law Enforcement. ‘insurrection. Because the Posse Comitatus law only applies to federal military personnel, it does not restrict the forces of the National Guard unless they have been “federalised”, ie called up for federal service. But even though the DC Guard is under permanent federal control, the Justice Department has long maintained that it can nonetheless operate in a non-federal “militia” status. As a result, the president can use the DC Guard as a national police force whenever he wants.

That’s exactly what President Trump did last June, deploying the DC Guard in response to largely peaceful protests against police brutality. He also asked several governors to deploy their own National Guard forces to Washington, against the will of the DC mayor. Although these non-state units were nominally under the control of their governors, they actually reported through the DC Guard chain of command. This meant that they received orders from the Secretary of the Army who, in turn, acted under the direction of the President. Indeed, this large force of National Guard troops – much larger than the DC Guard alone – was used to exercise a national police function under presidential control, all without any legal authorization.

Transferring control from the DC National Guard to the mayor of Washington would solve this problem. The president could still take command of the DC Guard if necessary by federating it, but the Guard would then be bound by the Posse Comitatus Act, like all other military forces controlled by the federal government. Thus, he would only be allowed to engage in law enforcement activities if there was a law expressly authorizing such activity.

The deployment of multi-state guard units in Washington also illustrates a second problem – one that would be addressed by an amendment proposed by Rep. Mikie Sherrill (D-NJ) and adopted during the House Armed Services Committee’s NDAA markup. This provision would clarify that a state governor cannot send his national guard forces to another state or territory without the consent of the latter jurisdiction.

The principle that one state cannot effectively invade another is undoubtedly inherent in the Constitution. However, last June, then-Attorney General William Barr asserted that when National Guard forces operate in what is known as “Title 32 status” – a service status in which the Guard may carry out federally funded missions at the request of the president, while remaining under the command and control of the state, the governor of their state may send them to another state or territory even despite the objections of this jurisdiction.

Barr’s interpretation of the law is unprecedented and runs counter to fundamental constitutional principles. While the National Guard operates under state command, the equal sovereign status of states under the Constitution prevents one state from sending its militia to another without consent. Certainly, when the President federated the Guard, there is no doubt that the forces of the Guard can be sent where the President deems necessary. But this type of deployment is an exercise in federal power, and one that Congress has expressly authorized by the Insurgency Act. A state governor cannot step into the shoes of the federal government just because the president asks him to.

Barr’s interpretation of the law also infringes the principle of posse comitatus. When operating under Title 32 status, guard forces are exempt from the Posse Comitatus Act as they are under the command and control of the state. A key element of this control, however, is the governor’s right to refuse a particular federal assignment. This right makes no sense if the president can simply approach another governor and ask them to deploy their state guard in the reluctant governor’s state. In this scenario, the cooperating governor becomes a fig leaf for the president to use the military as a police force anywhere in the country, without following the procedures set out by Congress in the Uprising Act or incurring the political cost. of his invocation. The Sherrill Amendment fills this gap by requiring both the sending and receiving jurisdiction to consent when Guard units are deployed in Title 32 statute.

The third major reform of the NDAA responds to a different kind of abuse by the National Guard. Last summer, South Dakota Governor Kristi Noem used a private donation from a billionaire in Tennessee – who happens to be a major Republican donor – to fund the deployment of 48 members of the Dakota National Guard from South to the US-Mexico border, where they were to act as self-proclaimed immigration enforcement officers.

This bizarre and unprecedented ploy was an obvious abuse of power. Treating the Guard forces like soldiers for hire undermines public confidence in the military, reduces transparency and hampers accountability. This sends the message that National Guard forces are virtual mercenaries who can be deployed at the whim of any billionaire willing to pay for their operations – and perhaps their governor’s re-election campaigns.

An amendment proposed by Representative Veronica Escobar (D-TX) and adopted in committee would ban interstate deployments financed by private funds of the Guard, except in certain cases of natural disasters. This is a constitutionally sound common sense solution that would prevent governors from selling the services of their National Guard forces to the highest bidder.

The past year and a half has exposed dangerous loopholes in the laws governing the national deployment of the National Guard. These three provisions of the House NDAA would go a long way in filling these gaps and preventing future abuses.