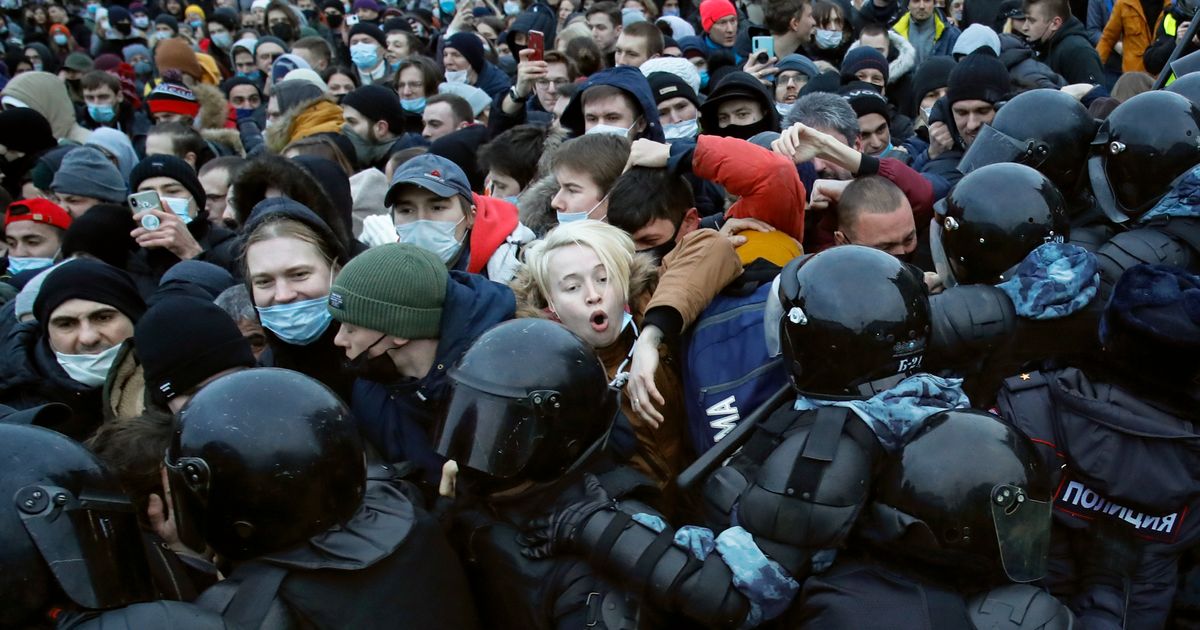 MOSCOW (AP) — The prison sentence imposed a year ago on the Kremlin’s main critic, Alexei Navalny, dealt a severe blow to the Russian opposition — and then the situation worsened.

Over the past 12 months, dozens of activists, independent journalists and rights defenders have been raided, detained and branded as terrorists and foreign agents.

The setbacks began when Navalny was arrested in January 2021 upon his return from Germany, where he spent five months recovering from nerve agent poisoning he blames on the Kremlin. His imprisonment sparked the biggest wave of protests in Russia in years, followed by mass detentions.

Then, on February 2, 2021, a court ordered Navalny to serve 2½ years in prison for a parole violation resulting from a 2014 suspended sentence in a fraud case. Navalny insists she was politically motivated.

The multi-pronged crackdown on dissenting voices was unprecedented in post-Soviet Russia.

“Crackdowns were always used during Putin’s tenure, but they were complementary” to other efforts that directly targeted the political process, such as elections and propaganda, said political analyst Abbas Gallyamov. “The situation has changed dramatically in the last year.”

In recent weeks, the government has again put pressure on Navalny and his team, adding him and his associates to the National Register of Terrorists and Extremists and calling for the imprisonment of his brother.

Authorities also ordered independent media on Tuesday to remove dozens of articles based on Navalny’s multiple revelations about corruption among government officials.

Kremlin spokesman Dmitry Peskov insisted that any prosecution in Russia was not politically motivated.

Initially, Gallyamov said, the pressure on opposition activists and media critical of the Kremlin was increased due to the September 2021 parliamentary elections, which were widely seen as key to Putin’s efforts to consolidate his grip on the power.

After the vote was in favor of the Kremlin, the authorities saw no reason to stop tightening the screws on dissent. “It’s easy to run the steamroller of repression. It’s hard to stop him,” Gallymov said.

Navalny’s associates, particularly those who announced they were running for parliament, faced a flurry of criminal charges in the run-up to the election.

His closest allies, Ivan Zhdanov and Leonid Volkov, who had left the country, were put on a wanted list in connection with multiple criminal charges. In March, Zhdanov’s father, a former municipal official from the Nenets region in northern Russia, was arrested on charges of abuse of power widely seen as politically motivated.

Oleg Stepanov, Navalny’s former Moscow bureau chief, had to run his campaign for the State Duma under house arrest after being accused of breaking coronavirus regulations by calling for unauthorized protests against the arrest by Navalny. The case also ensnared Navalny’s brother Oleg, spokeswoman Kira Yarmysh, longtime ally Lyubov Sobol and several other activists.

Stepanov could communicate with the outside world only through his girlfriend and lawyers. He was eventually dropped from the race, along with the vast majority of opposition candidates, and given parole-like restrictions in the virus-related case.

Sobol, who has also sought refuge abroad, has four criminal cases against her in 2021.

“I was convicted in two criminal cases. Two others were thrown at me. I was considered a member of an extremist group. My team was expelled from the country and I spent about two months under house arrest,” she said.

In the most crushing blow to Navalny’s team, authorities banned the Anti-Corruption Foundation and its nearly 40 regional offices across the country in June 2021. The designation as an extremist organization exposed associates and supporters to prosecution and barred them from standing for public office.

Several former regional office coordinators were arrested for extremism at the end of last year.

Stepanov left Russia after the elections to study and hoped to return after graduating, but the arrest of one of the regional coordinators made him rethink that.

“I underestimated the risk and left temporarily, but now I understand it’s for an indefinite period,” he said. He was put on a wanted list last week.

Other opposition groups suffered similar unrest. Open Russia, funded by Russian tycoon and Putin critic Mikhail Khodorkovsky, disbanded in late May, fearing persecution of its members under a law that bans “undesirable” organizations. A few days after the group ceased to exist, its leader, Andrei Pivovarov, was imprisoned.

Authorities accused him of leading an “undesirable” organization, even though Open Russia had ceased to exist by the time a case against Pivovarov was opened. If found guilty, he could spend up to six years in prison.

Tatyana Usmanova, a close ally of Pivovarov and a former campaign manager during his run for the State Duma last year, said the scale of the crackdown was hard to anticipate.

But as pressure mounted on Navalny’s organizations, it became clear that authorities “fear those who can round up hundreds, thousands, tens of thousands of people and somehow coordinate them, direct them to something,” Usmanova said.

The crackdown also extended to dozens of media outlets, individual journalists and rights groups. They have been labeled “foreign agents” – a designation that invites excessive government scrutiny and connotations that discredit the recipient. Some have also been declared undesirable or accused of links to undesirable organisations.

Four independent news sites have been shut down and at least two rights groups have been disbanded.

Meduza, Russia’s most popular independent media outlet based in Latvia, was the first in 2021 to receive the foreign agent designation. Alexei Kovalev, its investigative editor, said the outlet immediately began losing advertisers and sources.

Just like other organizations with the same designation, Meduza was obligated to put a hefty 24-word disclaimer in large print revealing its status as a foreign agent on every piece of content it produced. Missing the disclaimer can lead to crippling fines.

Meduza managed to rally a major crowdfunding campaign among its readers. As the list of foreign agent media grew, the designation began to lose power, Kovalev said.

Advertisers who want to reach “a quality audience” will have to advertise in a foreign agent outlet “because there are no more non-agents there,” he said.

Opposition activists refuse to admit defeat. Sobol told The Associated Press that members of Navalny’s team “still make it work,” despite being persecuted and kicked out of the country.

“We publish surveys. We are doing organizing work and we are seeing strong support in Russian society which has not diminished,” she said.

Usmanova said Open Russia activists continued their efforts even after the group disappeared – some ran for local elections, others campaigned for various causes.

It would be impossible for the authorities to stifle all critical voices, especially on the internet and social media and with growing awareness of the dire situation in the country, Usmanova said.

“Even in the Soviet Union,” she said, “they failed to throw all the dissidents in jail and silence them.”

Mitya Osipov contributed to this report.