Latinx Files: As 2020 draws to a close, a time for reflection and hope 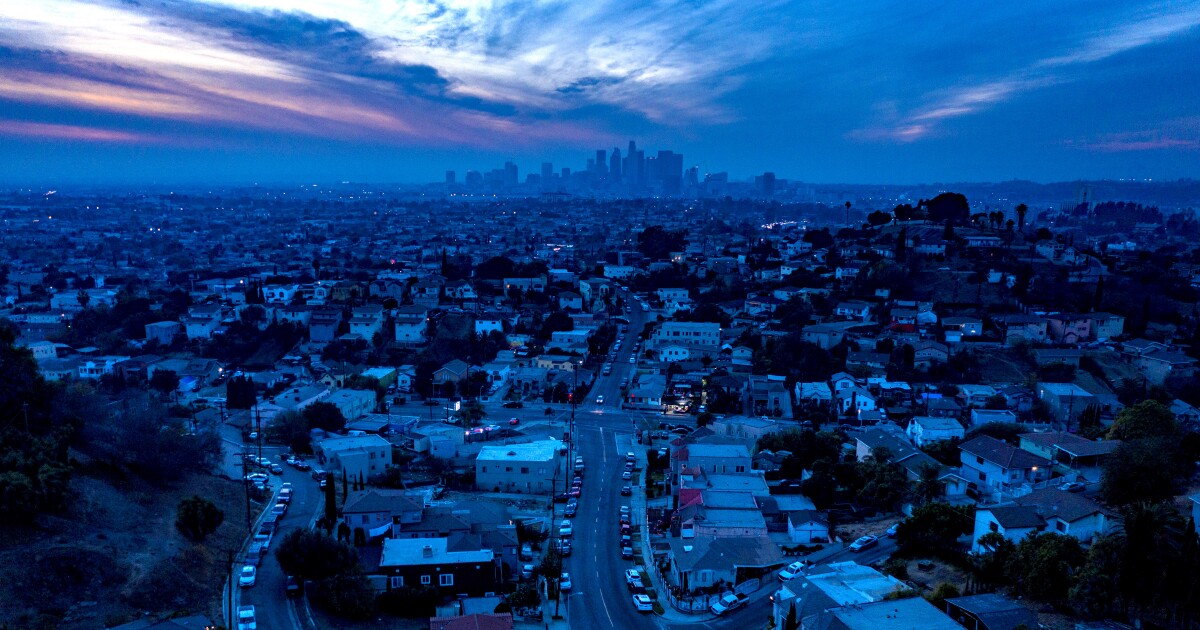 Latinx Files: As 2020 draws to a close, a time for reflection and hope

At this time tomorrow, 2020 will be gone. Congratulations, you have succeeded! No kidding, you should feel a sense of pride and accomplishment for having endured a global pandemic, economic uncertainty, and a racial calculation that dates back to the 1960s.

You’ve faced the loneliness that comes from doing the right thing. You were separated from your families on vacation, you celebrated birthdays on Zoom. Some of us have had to deal with the FaceTime family from hospital beds. You just wanted a hug from a loved one.

You also survived the presidential election. You remember ?

But as this year draws to a close, the COVID-19 pandemic is far from over. It may be tempting to think so, given the good news about vaccines, but the reality is that December was. California worst month yet and January is not looking better. The same scenario seems to be playing out in Texas and Florida.

The Latinx community continues to be disproportionately affected by the pandemic. I remembered this harsh truth once again when reading this story by Marisa Gerber, Andrea Castillo, Julia Barajas and Andrew J. Campa, who reported in East Los Angeles, one of America’s largest Latinx enclaves and a COVID-19 hotspot where 1 in 10 people have tested positive for the virus.

What my colleagues have discovered are lives shattered and marked by ongoing trauma and uncertainty.

“They are just seeing a number or a statistic,” said Magda Maldonado, a funeral home manager who has seen the human cost firsthand, of those who reject the severity of the coronavirus. â€œBut I can see the pain. I can see broken families.

Within a week, four of Maldonado’s own employees lost family members to COVID-19.

My colleagues have also spoken to Paloma Yanez, whose family has been spared the infection but not the economic devastation caused by the coronavirus. Her husband’s hours were cut in September after returning to work after a disability, and the family had to rely on their church pantry to survive.

“It’s just a fight, you know? ” she said. â€œWe are late on most of the bills. I cannot work because of my illnesses and we are barely coping. It is difficult, but we are confident that things will improve.

I find solace in that last line. She’s right. It’s tough, but things will get better. This too should pass. There is already evidence that this is the case. There is finally a vaccine and while the deployment was sloppy and slow, it is likely that many Latinxes will be given priority because many of us who are fortunate enough to be employed are seen as essential workers. If you have the opportunity to get the vaccine, don’t have a pre-existing condition that would cause a severe allergic reaction, and you care about the greater good, please grab it. As my colleague Brittny Mejia pointed out, it is imperative that Latinxs get vaccinated.

And people will finally start receiving their stimulus checks after months of congressional inaction. It’s nowhere near enough, but direct deposit should happen overnight.

Until we are out of the pandemic, wear your masks and maintain social distancing. The best way to make sure 2021 will be a better year than 2020 is to go through harm reduction.

For updates every day of the week, sign up for Coronavirus Today, a special edition of The Times health and science newsletter.

Your support helps us get the news that matters most. Become a subscriber.

Things we read in 2020 that we think you should read

â€¢ August 29 marked the 50th anniversary of the Chicano moratorium, which began as a peaceful march calling for an end to the Vietnam War – Mexican American soldiers were disproportionately killed in combat – but turned violent soon after l arrival of the police. A group of Times reporters have collaborated to bring you this in-depth examination of the heritage of the Moratorium of Chicano. We even made a zine!

â€¢ In 1984, the Los Angeles Times received the Pulitzer Prize for Public Service, the highest honor in journalism, for a series of articles on the Latinx community of Southern California. It was revolutionary work, showing then what we still have to repeat: we are not a monolith. The Mexican-American journalists who worked on the series became the first Latinxes to win a Pulitzer. The series has been digitized in its entirety this summer by my colleagues Denise Florez and Christian Orozco, and myself. I can honestly say that helping to preserve an important part of this journal’s legacy has been one of the most rewarding things I have done in my career, and this newsletter is only possible through hard work. of these pioneers. Do yourself a favor and read each story. Although they were written over 30 years ago, they still seem relevant today.

â€¢ Every once in a while you’ll stumble upon a title that’s so good you just know the story won’t disappoint. My colleague Kate Linthicum’s report on Mexico’s top luchadores struggling due to the pandemic falls a lot into this category – it’s called “In the ring, they were gods. Now coronavirus is forcing lucha libre stars to sell street food. â€œAlso noteworthy is the incredible photograph of my colleague Gary Coronado that accompanies this story. I am obsessed with this photo.

â€¢ Frequent Los Angeles Times contributor Carlos Aguilar (his recent retrospective on the 20th anniversary of “Amours Perros” must read) make this list for Hispanic Heritage Month of 20 essential films made since 2000 that center the American Latinx experience. It’s a wonderful introduction to Latinx cinema, and it’s also a stark reminder of how indifferent Hollywood is telling our stories despite what he claims. With the exception of “Spider-Man: Into the Spiderverse” and “Spy Kids,” every movie on this list is an independent production.

â€¢ Benito Antonio MartÃ­nez Ocasio, better known as Bad Bunny, must be at the top of the very short list of â€œpeople who prospered in 2020â€. He started his year with an appearance in the Super Bowl halftime show, released three albums (â€œYHLQMDLGâ€, the mixtape â€œLas que no iban a salirâ€ and â€œEl Ãšltimo Tour del Mundoâ€) and even managed to make Crocs cool. Much has been written about el conejo malo over the past 12 months, but my favorite story is this one May Rolling Stone Profile written by my now colleague Suzy Exposito, who captures the inner workings of the locked-out trap superstar.

And if you want to let Bad Bunny ring in your 2021, you definitely need to do what this tweet suggests:

â€¢ TikTok was Most downloaded app of 2020, which is not surprising given that the locked-out world needed more to do than doomscrolling. The social media platform has been a a boon for influencers and content creators, as good as a tool of political sabotage and theater. It was also the backdrop for two of my favorite stories this year.

The first is this truly heartwarming report from former Times intern TomÃ¡s Mier (I miss you, mijo!) Actual substantial relationship with their offspring.

The second is Profile of Laura Zornosa on Nathan Apodaca, who became a star in September after a video of himself longboarding serenely on Fleetwood Mac’s â€œDreamsâ€ went viral. Apodaca’s story and its viral fame was one of the highlights of an otherwise bleak year.

â€¢ If you haven’t already, do yourself a favor and start reading “Hola papi !,an advice column author John Paul Brammer describes as a â€œQueer Latinx Dear Abby Huffing Poppers.â€ It’s hilarious, truly charming, and extremely relatable. Start with this post in which a “cool young lesbian in one of the gayest cities in America” â€‹â€‹describes herself and resigns herself to being alone forever. Although he speaks of romantic love, Brammer’s advice to seek solace in gratitude is extremely universal in these difficult times.

â€¢ And last but not least, you should read every story related to on this thread via the Los Angeles Times Latino Caucus Twitter account. It’s a wonderful sample of the vital work my colleagues at Latinx do and a great reminder that you can’t tell the story of Los Angeles, California, and this country without fully understanding our stories.

Best thing on the Latinternet this week: TFW you’re doing it for your immigrant parents

“Latinos are a plurality of the Californian population – and we just had a US Senator?” ” he wrote. He has a point. Nevada, Texas, Florida, New Jersey, Colorado, New Hampshire, and New Mexico all had a Latinx Senator before the Golden State, which has the largest Latinx population in the country.

While it was long overdue, it was no less inspiring to witness the moment Padilla found out about her appointment. I challenge anyone with immigrant parents to watch this video and not cry.

If you are a first generation Latinx, chances are a big driver in your life is the desire to succeed in order to validate the sacrifices made by your parents. It certainly is for me. This is also true for my colleague Esmeralda Bermudez, who wrote about it in August, and many of his readers, who told their own stories about their parents. As we rush into 2021, we hope you can have your own version of this moment in the year to come.