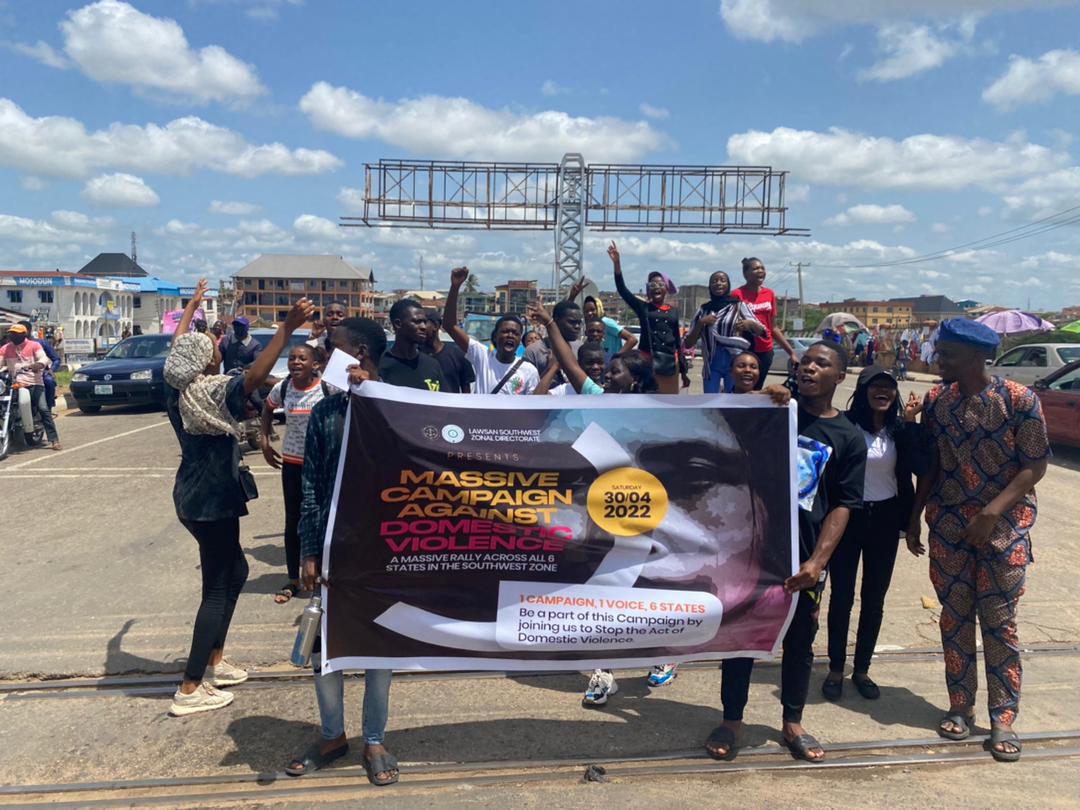 The South West Branch of the Law Students Association of Nigeria took to the streets on Saturday to lead an awareness campaign against domestic violence.

In a press release issued by LAWSAN, signed by its South West Zone Director, Richard Solomon, the students noted that the “campaign against domestic violence” was the brainchild of a team of dynamic and aware university students. , with the support of experienced staff. as lawyers and representatives of institutions sharing similar ideals.

The students, who gathered simultaneously in the six southwestern states, namely Lagos, Oyo, Osun, Ondo, Ekiti and Ogun, noted that they had identified that many people were misinformed and lacked necessary information on domestic violence in Nigeria and were ready to bring out the intricacies.

The statement said in part: “With the skyrocketing cases of domestic assault in recent times, it has become necessary to properly spread the concept and show how toxic this societal anomaly is. This has spurred law students across the Southwest Zone to action, stoking their zeal to end the social vice that has haunted the masses since time immemorial.

“Domestic violence is a threat that must be controlled in society, because it is not only experienced by women alone, but even by the male sex. This includes physically abusive behavior and assaults of all kinds; ranging from pinching, pushing, hitting or slapping, to choking, shooting, stabbing and murdering.

“Verbal, emotional, mental or psychological abuse is described as the use of words to criticize, belittle or otherwise diminish the confidence of the victim’s wife, husband or other intimate partner victims; this aspect is also taken into account in the field of acts of domestic violence.

“The ripple effect of the series of protests and campaigns by students in the South West Zone is to ensure that a huge amount is taken to eradicate the societal threat i.e. the domestic violence.”

It was gathered that Oyo State students held their rally at Trans-Amusement Amusement Park, Ibadan with a collaborative effort from some members of the University of Oyo Students Union. Ibadan, led by the organization’s Vice President and Oyo State Director, Oluotanmi Zainab, and were able to reach hundreds of people, including women traders.

Similarly, students from Osun State, led by Richard, took to the streets of Osogbo, the state capital. They traveled from Freedom Park to Osiumbare and Alekwodo.

In Ondo State, the movement was led by state directors and students from Achiever University and ELIZADE University. They gathered at Democracy Park and reached out to market women and the general public.

In Lagos, students took over the campaign on social media.

A Twitter A space meeting was held and present were attorneys namely Richard Okoroafor and Festus Ogun.

All rights reserved. This material and any other digital content on this website may not be reproduced, published, broadcast, rewritten or redistributed in whole or in part without the prior express written permission of PUNCH.