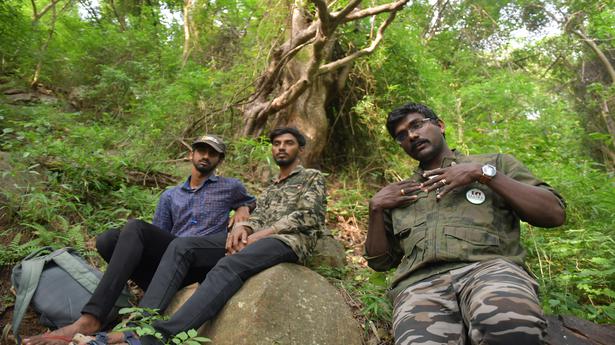 In a classroom full of children at Yercaud in the Shevaroy Hills near Salem in Tamil Nadu, wildlife researcher R. Brawin Kumar and his team tell a story of environmental conservation using puppets of shadows. Children watch in amazement as a king and his subjects discuss the need to stop poaching. The stage is teeming with 17 different goatskin puppets representing the fauna of the Eastern Ghats, including Elvira rat, shrew, mongoose, leopard cat, fox and Indian gaur.

“After watching a puppet show about the chameleon, the children swore never to harm the reptile again”

“In one of our most popular productions, a king traverses his empire when confronted by a group of animals complaining about uncontrolled poaching. The king intercedes for the animals with his subjects and convinces them to stop hunting,” says Kumar, 34, who holds a master’s degree in biotechnology from Madurai Kamaraj University. Currently a National Postdoctoral Fellow at the Indian Institute of Science Education and Research in Andhra Pradesh, Kumar has been studying the small mammals of the Eastern Ghats since 2010, when he began conducting detailed field surveys of the Bellied Hedgehog. naked (also known as the Madras hedgehog) found in Tamil Nadu. Recently, on the occasion of World Environment Day, the government of Tamil Nadu awarded him the Green Champion Award 2021 for his “significant contributions to safeguarding biodiversity through research, education and conservation”. .


The puppeteers in Kumar’s team come from his hometown, Kanyakumari. He met them a few years ago when they were working on vulture conservation with Arulagam, an NGO based in Tamil Nadu. “Some children feel sheepish after watching the puppet shows. For example, when we staged a play featuring a chameleon and asked them if they had met it, they all nodded. When we asked them if they kicked him out as well, almost the whole class said yes,” Kumar explains. After the show, the children swore never to harm the chameleons again.

A puppet show in a school

The puppet is part of a grassroots campaign launched by Kumar and his team in 2013 to educate local communities about wildlife and environmental issues. He has conducted over 150 outreach programs across Tamilnadu till date. “In the Shevaroy Hills alone, we campaigned in 15 villages,” says Kumar, who is the founder of the Elvira Conservation Initiative (ECI), which works to protect the Elvira rat and other coexisting species.

“We have developed comprehensive educational aids that help children learn about wildlife. Children are more receptive to conservation messages if they are communicated in an entertaining way through puppets, cartoons, coloring books or puzzles. We told them about snakes, bats, pangolins, hedgehogs and other mammals that way,” Kumar explains.


He has created two comics, Thorn Forest Epic ( Mullikattu Idhigaasam) and Threats from pangolins ( Alangukku Aabathu), about the dangers faced by the Madras hedgehog and the pangolin respectively. Aided by researchers Mohammed Shahidh and Mohammed Thanvir, Kumar’s project was a success. “Our activities are so well received that we are called back several times to the same schools. We conducted awareness campaigns in a single school for three consecutive months,” he says proudly.

Kumar with a hedgehog

Among the species documented by the team are the critically endangered Elvira rat (Cremnomys elvira), a rodent found only in the Yercaud Hills; the endangered ornamental tarantula (Poecilotheria formosa) found in Salem; and the endemic Shevaroy Hills earth snake (Uropeltis shorttii). “Very little is known about many Eastern Ghats species compared to Western Ghats endemics. There just isn’t enough data to make comprehensive conservation plans for the species living in this mountain range,” he says.

The team therefore came to rely on local communities to document the different species and their ranges. “When we talk to villagers and community members about the wildlife they spot nearby, we get a good idea of ​​what species they are sharing the space with,” he says.

Several small mammals in the Shevaroy Hills and Eastern Ghats are threatened with extinction unless concerted efforts are made to protect them. “For example, the Elvira rat inhabits highly specialized habitats in rocky outcrops. Due to their extremely limited range, a single event such as disease, fire or other anthropogenic factors could wipe out the entire population in a very short time,” he says.


His main research focuses on the Madras hedgehog, an elusive animal found in Tamil Nadu. As it is tiny and its quills are used in traditional medicinal practices, it is threatened by poaching as well as the risk of being run over by vehicles.

“Many of the species we study are very small and do not receive the same attention that a flagship species like the tiger or the elephant receives. But they are as important for biodiversity and ecology as larger mammals” , explains Kumar.