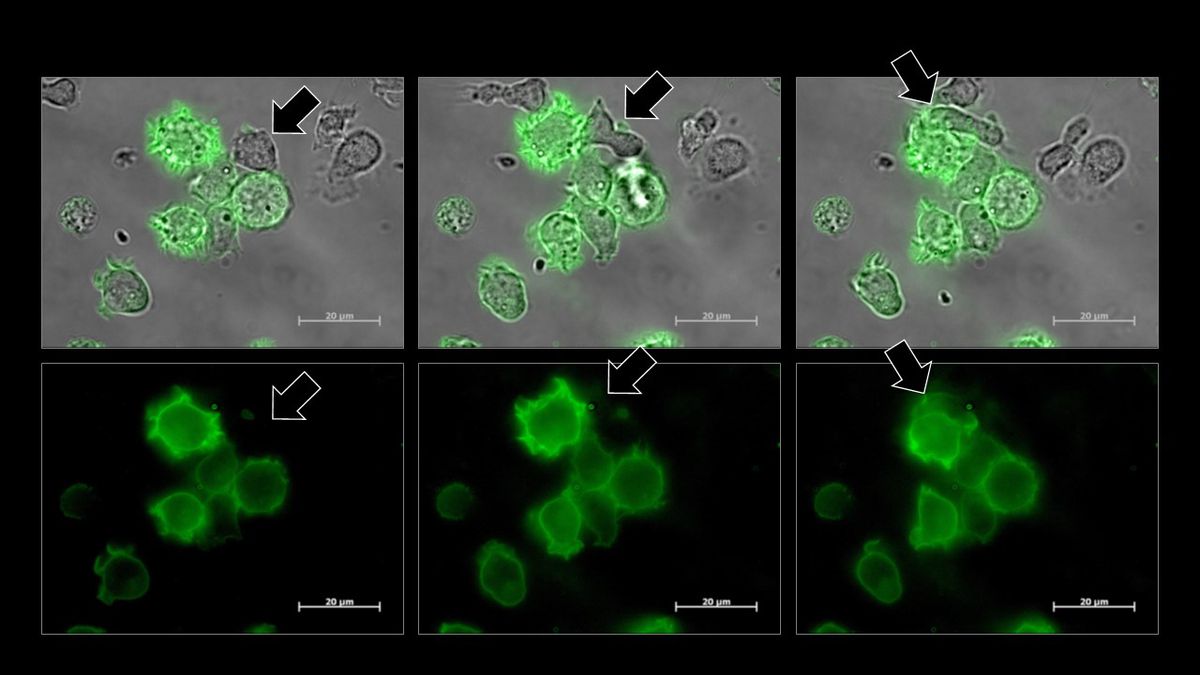 According to scientists at the Ottawa Hospital in Canada, cancer can start in the body because of what they call “a kind of kiss” between multiplying cells and the body’s immune defences.

In other words, as the researchers explain, certain white blood cells, such as NK cells (Natural Killers), are able to recognize and kill cancer cells.

However, in some blood tumors, defensive NK cells become dormant after interlocking with cancer cells. This renders NK cells unable to kill cancer cells, paving the way for cancer to develop.

The phenomenon is called trogocytosis, from the Greek trogo trogo, which means nibbling or gnawing. The defensive cell comes into contact for a few minutes with another cell – which may, for example, be cancerous or infected with a virus – and steals a fragment of its membrane. “My hypothesis is that immune cells have evolved these mechanisms to better perceive and be influenced by their environment,” says Ardolino, who leads the Ottawa team.

Making proteins takes time and energy, so white blood cells steal them from neighboring cells to regulate their own behavior in response to the outside world – when infected with a virus, for example. “It’s like entering a baking contest and being late for the contest,” says Ardolino. By comparison, he says, “you could make your own cake batter,” but it would take less energy to “just take pre-made cake batter from the fridge.”

The kiss between a cancer cell and an NK cell is a unique case of trogocytosis. NK cells are amazing cancer killers, but a protein called PD-1 prevents them from working properly. At first, the Ardolino team did not understand where this protein came from. As they discovered, “NK cells don’t make their own PD-1 protein, they steal it from cancer cells.” During the kiss, the NK killers steal a fragment of tumor membrane laced with these numbing proteins.

The Italian immunologist says it is clear that some cancers take advantage of trogocytosis to bypass the human body’s defenses.

The finding is the result of a multitude of experiments on mice with leukemia and was published Wednesday in the journal Science Advances.

Other cancer-fighting white blood cells, T cells, produce their own PD-1 protein, a natural deterrent that prevents them from attacking other normal cells in the body. As Ardolino points out, there are already drugs that target this PD-1 protein. Indeed, some of them are among the biggest moneymakers in the world, such as Keytruda, a drug from the American pharmaceutical company MSD indicated against melanoma, certain lung cancers and certain other tumors. Sales of Keytruda were close to 16 billion euros in 2021, according to an analysis by the British company Evaluate Vantage. Opdivo, another similar antitumor drug made by US company Bristol Myers Squibb, had sales of 7 billion euros.

By inhibiting PD-1, these drugs release the natural brakes and trigger the ferocity of T cells against cancer cells. Japanese immunologist Tasuku Honjo won the 2018 Nobel Prize in Medicine for discovering the PD-1 protein more than a quarter century earlier and learning how to inhibit it in order to fight cancer. The United States approved the drug Keytruda in 2014 and authorized Opdivo the following year. Immunotherapy, in which the human body’s natural defenses are stimulated in an attempt to eliminate a patient’s tumor, was born.

In some countries, these treatments can cost more than 50,000 euros per year and per patient. Tasuku Honjo himself lamented these prohibitive prices in an interview with EL PAÍS in 2019. “It’s always the same problem with any medicine. It would be better if it was cheaper, so everyone could enjoy it. Even penicillin, when it came on the market, was very expensive. And then it became affordable for everyone,” Honjo explained.

Ardolino’s team first noticed four years ago that these PD-1 inhibitor drugs, originally designed to stimulate T cells, also stimulate NK cells. Immunologist David Raulet from the University of California at Berkeley participated in this work. “The field of cancer immunotherapy has focused on mobilizing T cells, but we believe that NK cells also play an important role,” Raulet said at the time. Some tumors do not respond to current treatments that activate T cells, but they might succumb to attack by suitably equipped NK cells.

Michele Ardolino believes her new discovery will help refine therapies to fight cancer. Just as each cancer is unique, so is each person’s immune system. Ardolino’s dream is that when a cancer patient arrives at the hospital, doctors can perform a biopsy on the patient not only to determine specific mutations in their tumor, but also to obtain a very details of the patient’s immune system response. Each patient could then be offered a more targeted immunotherapy, even adapted to the cancerous proteins that steal their white blood cells.