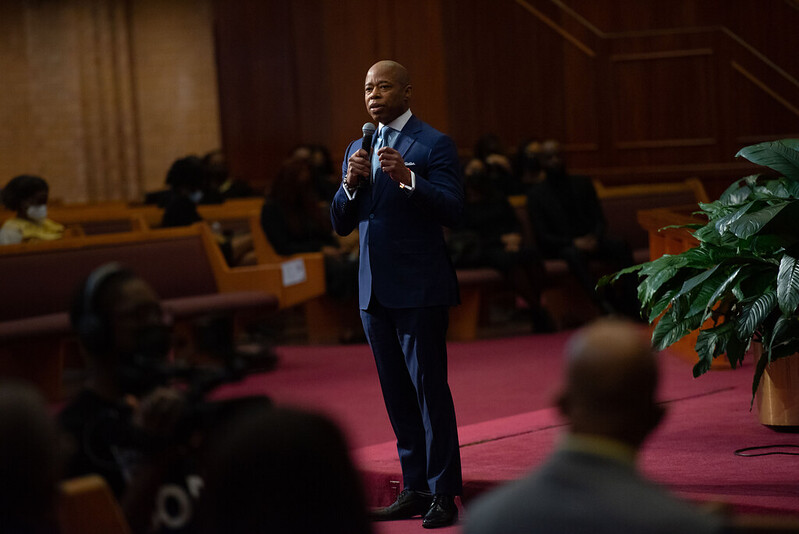 Throughout his campaign, Mayor Eric Adams has spoken out about the dysfunction that plagues our city, resulting from a failure to go “upstream” to address the issues we face. There is no more tragic example of this than Rikers Island, where conditions are so dire that hundreds of incarcerated people have thrown a hunger strike.

The moral costs of this stain on our city outweigh even the outrageous financial costs. Our supposedly progressive city continues to respond to crime rather than prevent it; allow freedom to be determined by wealth and racial prejudice; uprooting people from their communities without due process and subjecting them to abuse, increasing their chances of future involvement in the criminal justice system rather than reducing them; and spend lavishly to do so, to more than $556,000 per incarcerated person per year.

But we can stop.

New York City’s incarceration rates have been reduced in response to decades of grassroots organizing, but we still have a long way to go. Rikers Island is still full of people who have been abandoned by our society, time and time again. Just look at it obituaries of people who have died in the hellish conditions of Rikers over the past year. Among them were people struggling with bipolar disorder, substance abuse, schizophrenia, homelessness, physical disabilities, learning disabilities and job loss. In addition to their individual challenges, they were all black and brown men, growing up in a society that starved our communities for resources and then punished us in our struggle to survive.

Growing up in Brooklyn, I saw this firsthand. In the 1970s, New York faced a budget crisis. Education, health and social services were placed on the city budget, disproportionately affecting already neglected communities like Brownsville, East New York and Bedford-Stuyvesant. The criminalization and incarceration of people of color escalated in the 80s. At that time, all my older brothers were affected by the criminal justice system.

In the early 90s, at the age of 16, I was sent to Rikers when the average daily prison population was over 21,000 and over 100,000 people per year. It was the consequence of austerity driven primarily by particular ideology and racism rather than budgetary necessity. Since then, New York’s prison population has been reduced by almost 75% and our city is much safer, but much of the same misguided thinking still guides our policy responses – for example, calls for more incarceration when people with criminal records are arrested. Shouldn’t this show us that the criminal justice system has failed to address the root cause of their behaviors, and that we need to do something different?

Fortunately, we have so many examples of what makes our communities stronger and safer. This month, the commission on reinvestment in communities affected by Rikers Island, established by Local Law 193, will release its first set of recommendations. Mayor Adams said he wants to shut down the pipeline that feeds Rikers, and we couldn’t agree more. We will share a plan for doing so, developed by a commission filled with both lived experience and technical expertise, of which I was a member.

We will ask the new administration to invest in the things that work – youth employment, job training, supportive and affordable housing, quality treatment, mentoring, and more. We look forward to seeing these recommendations included in the Mayor’s first executive budget. And we know exactly how we can pay for it.

New York City spends $2.6 billion per year to operate its grossly dysfunctional prisons. Decades of corruption have created the shocking reality that New York City runs the the richest in personnel the country’s prison system (with around five guards for every three people incarcerated – seven times the national average ratio), but generally fails to meet even the most basic standards, including providing those in their custody with recreation, taking them to their court dates, and protect them from disease, injury, and death.

Data compiled by the Vera Institute shows that if the staff of the New York City Department of Corrections were reduced by 50% (to match the reduction of more than 50% in the prison population since 2014), we could save $1.1 billion every year – money that could be reinvested in all the upstream supports that prevent crime, rather than respond to it.

When the number of people in New York prisons is reduced to less than 3,300 – as required by the Rikers prison complex closure plan – and the DOC budget is reduced proportionately, we can release $1.8 billion every year to invest in housing, education, health, job creation, etc. By simply reinstating a hiring freeze for DOC and limiting overtime, New York City can save and reinvest hundreds of millions next year.

To fully recoup and redirect the wasted funds from the bloated DOC budget, we will need a plan to significantly reduce the DOC workforce. This will undoubtedly require leadership, but resisting or delaying it would double the dysfunction.

It’s not just the inmates who are miserable on Rikers Island. The guards often talk about how much they don’t like their job, and that it may even have negatively affected their health and their families. But they stay because it’s the best pay and benefits they can get without a college degree or other training. Why don’t we prepare this workforce of mostly black and brown people for new careers that move our city forward, instead of letting them cling to jobs that depend on failed approaches that we know we have to give up?

A broad coalition of lawyers across the city has worked hard to expose the absurdity of Rikers Island and come up with a plan for its closure. We look forward to working with the new administration to achieve the the entirety of this vision, and truly turn the page on Rikers Island and all it stands for.

***
Darren Mack is co-director of Freedom Agenda, one of the organizations leading the campaign to shut down the Rikers. On Twitter @iamdarrenmack.

***
Got an opinion idea or submission for Gotham Gazette? E-mail This email address is protected from spam. You need JavaScript enabled to view it.