What does the massive fentanyl seizure say about the security relationship between the United States and Mexico? 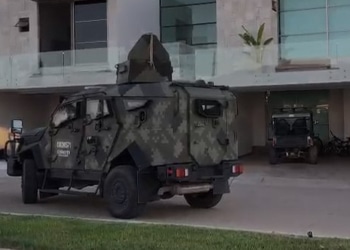 What does the massive fentanyl seizure say about the security relationship between the United States and Mexico?

A recent seizure of fentanyl in Mexico highlighted the ability of organized crime groups to mass produce the lethal synthetic opioid. Still, the timing suggests that US officials may increase pressure on officials south of the border.

At the end of October, members of the Mexican army and the National Guard raided a synthetic drug laboratory housed in an apparently bourgeois house. in Culiacán, the capital of the northwest of the state of Sinaloa. In the house, troops seized 118 kilograms of fentanyl, the armed forces announced in a Nov. 4 Press release.

This seizure of “pure fentanyl is considered the largest in history,” the Secretariat of National Defense (Secretaría de la Defensa Nacional – SEDENA) said in the statement.

SEE ALSO: Impact of illicit fentanyl felt on both sides of the US-Mexico border

Military officials said the lab could produce 70 kilograms of fentanyl each month, which could be turned into around 70 million counterfeit pills.

During the operation, authorities arrested Armando N, alias “El Inge”, a suspected Sinaloa cartel leader who allegedly headed a cell responsible for part of the group’s synthetic drug production in the capital. Four of his associates were also arrested.

Illegal seizures of fentanyl in Mexico have increased sharply in recent years, particularly along the US-Mexico border. By the end of September 2021, authorities had seized more than 1,200 kilograms of synthetic drugs across the country, according to data Mexican National Guard. That’s about 25 percent more than the nearly 1,000 kilograms seized by authorities in the past six years combined between 2015 and 2020, according to data compiled by the civil society group Mexico United Against Crime (Mexico Unido Contra la Delincuencia – MUCD).

The latest seizure of fentanyl is emblematic of the ability of Mexican organized crime groups to adapt and increase production as the designer drug becomes one of the main staples in their drug trafficking portfolio.

“These traffickers already have the expertise in meth production, and that knowledge refines and increases over time as they adjust to the needs of the market. From there, it’s just a improved productivity, “said Jaime Arredondo, professor at the university. de Victoria and researcher at the Canadian Institute for Substance Use Research.

Certainly, synthetic opioids have become the primary driver of the drug overdose crisis in the United States. Last year, the U.S. Centers for Disease Control and Prevention recorded 93,331 drug overdose deaths, mostly due to fentanyl, which has come to dominate the US opioid market.

“The drug market has evolved and production in Mexico seems to reflect these changes in the United States,” according to Cecilia Farfán-Méndez, an expert in organized crime and head of security research programs at the Center for US-Mexican Studies. at the University of California, San Diego.

SEE ALSO: Drug-related deaths in US skyrocket, fueled by Mexican production of synthetics

The timing of the supposedly record fall is also curious. Last month, US Secretary of State Antony Blinken meet Mexican President Andrés Manuel López Obrador in a “high level security dialogue”. This happened shortly after the United States Drug Enforcement Administration (DEA) issued a public safety alert about the “huge increase“counterfeit fentanyl pills in the country, the” vast majority “of which are produced in Mexico, according to drug officials.

Security relations between the United States and Mexico have been anything but amicable lately, and the seizure of fentanyl could be Mexico’s response to mounting pressure to fight drug trafficking – one of the few priorities on which the two countries can agree.

The seizure was characterized as historic and presented in a way that is sure to make headlines, and it made. However, photos shared by authorities show various bags of what appear to be illegal fentanyl pills, which Aredondo says are rarely pure fentanyl.

“The main psychoactive ingredient is fentanyl, yes, but it is extremely rare to see a pill containing 90-99% fentanyl. It is almost always mixed with other fillers,” he told InSight. Crime. Certainly a October 2019 Report by the DEA’s Fentanyl Signature Profiling Program (FSPP) found that out of 106 tablets obtained from seizures in the United States and analyzed, “the average tablet contained 1.7 mg of fentanyl … [and] About 75 percent of the tablets on display contained a combination of acetaminophen, dipyrone, lactose and mannitol, “the report says.

There is no doubt about the significance of the seizure – for both Mexico and the United States – but experts said context and perspective mattered. “It looks like the Mexican authorities may be trying to talk about their ability to dismantle a synthetic drug lab with the type of production capacity to produce so many pills,” Farfán-Méndez said, “but that was only ‘it’s a matter of time before we see something like this in Sinaloa. “

We want to maintain the largest organized crime database in Latin America, but to do so we need resources.

What are your thoughts? Click here to send your comments to InSight Crime.

We encourage readers to copy and distribute our work for non-commercial purposes, with attribution to InSight Crime in the signature and links to the original at the top and bottom of the article. Check the Creative Commons website for details on how to share our work, and please email us if you are using an article.